Morphometrics of the stapedius muscle: A systematic review of cadaveric studies

The stapedius is the smallest skeletal muscle of the body, which has a significant importance in otology as one of the important muscles for sound wave modulation. Despite its functional importance, there is very little data available on the morphometrics of this muscle. Therefore, we have systematically reviewed the morphometrics of the stapedius muscle, specifically the length and width of the muscle belly and tendon. A systematic literature search was performed in databases such as Medline, Google Scholar, PubMed, ScienceDirect, SciELO and otology textbooks using search terms such as “stapedius muscle”, “stapedius tendon”, “morphometrics”, AND “size OR “length” OR “width”, which yielded more than 239 article links.  All articles by their title and abstract were screened to see whether they included information relevant to our search terms. We also noted the distance between the stapedius tendon and the facial nerve. Of the eleven articles that met the inclusion criteria, only six studies comprising 106 stapedius muscles had the morphometric data. Pooled data (mean±SD, mm) of the stapedius showed: (i) total length 4.91 ± 0.88, (ii) muscle belly length 3.77 ± 0.63, (iii) tendon length 1.24 ± 0.42, (iv) belly and tendon width 1.29 ± 0.20, and 0.40 ± 0.09 respectively, and (v) distance of the stapedius tendon with the facial nerve 1.26 ± 0.24. Our pooled analysis from the available literature generated more representative values on the size of the stapedius muscle belly and tendon. This information might provide guidance in creating/reconstructing 3-dimensional models of the stapedius muscle and tendon in surgical intervention for otosclerosis.

The stapedius (ST) is the smallest skeletal muscle of the body, and consists of a muscle belly and tendon. The muscle belly originates from the inner wall of the pyramidal prominence, a tiny projection on the mastoid wall of the tympanic cavity, and the tendon attaches to the stapes neck (Figs. 1A, 1B) (Standring et al., 2008). Pieter Paaw (1615) first described the structure of the stapedius with more emphasis on an ossicle in its tendon. The ST muscle develops from the second pharyngeal arch by two anlagens: one for the tendon, which is derived from the internal segment of the interhyale; and another for the belly of the ST muscle, located in the second pharyngeal arch, medial to the facial nerve near interhylae (Rodriguez-Vazquez et al., 2010). He further postulated that the developmental variations of ST belly and tendon are likely due to the degree of angulation persistence between these two structures. Such structural variations of ST are accounting up to an incidence of 4.4% (Wright and Etholm, 1973).

According to Wright and Etholm (1973), the ST could be ectopic (along the facial nerve in facial canal), doubled, completely absent (or) lacking its tendon or belly. This muscle is important along with others for sound wave modulation. Its synchronized contraction with the tensor tympani muscle in a reflex manner dampens the high intensity and low frequency sounds to prevent excessive movements of the stapes; therefore, its paralysis leads to hyperacusis (Standring et al., 2008; Rubini et al., 2020). The morphometrics on the ST belly and tendon have gained so much importance in otology ever since Shea (1958) first introduced the procedure of stapedotomy. Since then many studies have discussed whether it is important to preserve the ST tendon during this procedure (Colletti et al., 1988; Gros et al., 2003; Arnold and Häusler, 2007; Elovikov et al., 2014; Rubini et al., 2020) and its possible role in conductive hearing loss and cholesteatoma (Zawawi et al., 2014; Rubini et al., 2020). Despite difficult access, considering the clinical importance of the stapedius, a few studies in the literature have measured the dimensions of belly and tendon (Cheng and Gan, 2007; Ramirez-Aristeguieta et al., 2010; Beger et al., 2019; Prasad et al., 2019; Wojciechowski et al., 2020; Rubini et al., 2020; Beger et al., 2020). However, the morphometric data on ST remains vague and scarce. Hence, we felt it was important to have a quantitative synthesis from the available literature. Therefore, the aim of this systematic review is to generate more representative values on the size of ST muscle belly, tendon and their possible association with ethnicity, gender and side.

We comprehensively reviewed the literature that is available online regarding the morphometry of the ST muscle and critically interpreted the pooled data. We hope that these quantitative data on the dimensions of muscle belly and tendon may give a broader perspective to surgeons in avoiding iatrogenic injuries of the muscle and its intimate relations, such as the facial nerve (FN).

A thorough search was made mainly using the electronic databases such as Medline, Google Scholar, PubMed, ScienceDirect, SciELO and otologic textbooks. The keywords for search used were as follows: “stapedius muscle”; “stapedius tendon”; “morphometrics” AND “size OR length OR width OR diameter”. We have limited our search criteria to the studies performed only on the cadavers. We have excluded all the case reports, case series, letters to editors and brief communications. The mean pooled ST belly length, ST tendon length, ST belly width, ST tendon width, total stapedius length, the mean pooled side and gender-based values were set to be the outcomes of our study. And also in the same articles, we have searched for the information on distance between ST tendon and FN.  The references of the included articles were checked and duplicates were deleted. We have not set restrictions on date, language or age of the studies. Initial screening on titles and abstracts of the articles were done to obtain the full-text articles. The data collection was done using the guidelines of Preferred Reporting Items for Systematic reviews and MetaAnalyses (PRISMA) checklist (Moher et al., 2009).

Data extracted included the country of study, sample size and measurements related to the size of ST muscle belly and tendon. The mean ± SD were calculated for all the outcomes. Then the mean values of all the outcomes were analyzed based on the geographical/population category using SPSS Version 23.0.

A total of 6 studies met the inclusion criteria (Fig. 2). One study that investigated the ST on cadavers was excluded (Prasad et al., 2019) due to incomplete data analysis on the measurements. The specimens are in range from 24.2 weeks fetus to 92 years age. We included a fetal study in our analysis due to a fact that the stapes and ST muscle do not grow according to increasing gestational weeks and attain the adult size in fetal period itself (Beger et al., 2019). The total sample comprised 106 ST muscles. Four studies (Cheng and Gan, 2007; Ramirez Aristeguieta et al., 2010; Beger et al., 2019; Beger et al., 2020) reported their gender distribution with 38 males and 19 females. Tables 1 and 2 show the characteristics of the included studies and outcomes of the individual studies. Table 3 show the measurement methods of the ST muscle in the included studies.

Outcome values of Gender and Side

Considering its location, size, and relationship with the adjacent structures, the ST muscle has always been a challenge for otologists. Due to its position, the ST muscle is known to pose procedural difficulties for otologists during cholesteatoma surgery or cochlear implantation (Rubini et al., 2020; Roberson et al., 2006).  It is also reported in few cases that the ST along with its belly and tendon might be surgically removed to provide maximum exposure to the retrotympanic space (Rubini et al., 2020). And these procedures might cause iatrogenic injuries to the facial nerve due to its close anatomical relationship with the ST muscle (Rubini et al., 2020).  Despite its high surgical relevance, studies regarding the morphometrics of ST muscle and its relationship with the FN are largely missing in the literature. Therefore we have done a quantitative synthesis on the stapedius muscle to derive a standard dataset. The main findings of our systematic review were as follows: (i) the mean ST muscle belly length and width were about 3.77 mm and 1.29 mm; (ii) the mean ST tendon length and width were 1.24 mm and 0.40 mm; (iii) the mean length of entire stapedius muscle was about 4.9 mm; (iv) the mean distance between ST tendon and FN was 1.26 mm; (v) there were no statistically significant differences between gender and sides of the outcomes.

It was surprising to note that the ST tendon length (1.27 ± 0.30 mm) and width (0.45 ± 0.08 mm) in 24 fetal temporal bones seemed to have reached adult shape and size in the fetal period itself (Beger et al., 2019). These measurements are almost similar to the mean data presented (Table 2) from the adult sample (Ramirez Aristeguieta et al., 2010; Wojciechowski et al., 2020; Rubini et al., 2020; Beger et al., 2020).  This interpretation give us a ground to argue that the muscle belly and tendon size does not change after birth and is similar to the size of adults as reported by few authors (Beger et al., 2019; Wojciechowski and Skadorwa, 2019). Our findings demonstrated that the ST muscle belly length was shown to vary between populations. While the Poland population had the shortest ST belly length, the Colombian population presented with the longest ST belly. However, the ST tendon length remained more or less same in all the studies. The reason for this variation in muscle belly length could be due to the methods of measurements they have used (Table 3).

Nevertheless, concordance was noticed between direct anatomical and radiological measurements. In relation to the width of the ST muscle belly and tendon, all included studies did not show any significant difference in values. For total length of the stapedius muscle, the Columbian population had the longest values with the Italian population having the shortest. Comparison between the measured parameters of the population may be relevant during surgery on the middle ear (Tccar et al., 2000; Silverstein et al., 1998), but also in the possible variations in the directions (or) distances between critical structures (Beger et al., 2020; Wojciechowski et al., 2020). Keeping this in mind, we analyzed the mean distance between ST tendon and FN. Only two studies, one based on dissection (Beger et al., 2020) and the other by microtomography (Wojciechowski et al., 2020) have reported the mean distance between ST and FN: it was 1.26 ± 0.24 mm, ranging from 1.14 ± 0.13 mm (Turkey) to 1.35 ± 0.30 (Poland) with no statistically significant differences despite the different measurement methods used.

These data might help surgeons to estimate how much space is there to operate or their choice on kinds of prosthesis or surgical tools they use in otosclerosis surgeries. Role of ST tendon in otosclerosis surgeries is controversial. Some studies stated that the ST tendon cut was quite common and results are satisfactory even without reconstruction of the tendon. However, preservation of the ST tendon was advocated by several surgeons in the hope of obtaining better functional outcomes (Fowler, 1960; Causse et al., 1997; Silverstein et al., 1998). Few studies reported that ST-tendon-preserving is desirable when the pyramidal process is at the same or higher level than the attachment of the tendon onto the neck of the stapes (Colletti et al., 1988; Dubreuil et al., 1990). In two-thirds of cases; however, the pyramidal process is below the neck of the stapes. In these cases, reconstruction of the ST tendon is preferred (Causse et al., 1997). Our data on morphometrics of tendon will help in reconstructing ST tendon in all the above described cases.

It is important for surgeons to be aware of standard morphometric dataset of ST muscle and tendon. In this systematic review of the stapedius muscle, we confirm that the belly and tendon does not change from intrauterine period to adulthood. There is concordance between direct anatomic measurements and radiologic measurements of the stapedius muscle.  The microarchitecture of stapedius muscle and its distance with facial nerve is also very important during both retrotympanic surgery and facial nerve surgery such as decompression and nerve grafting. 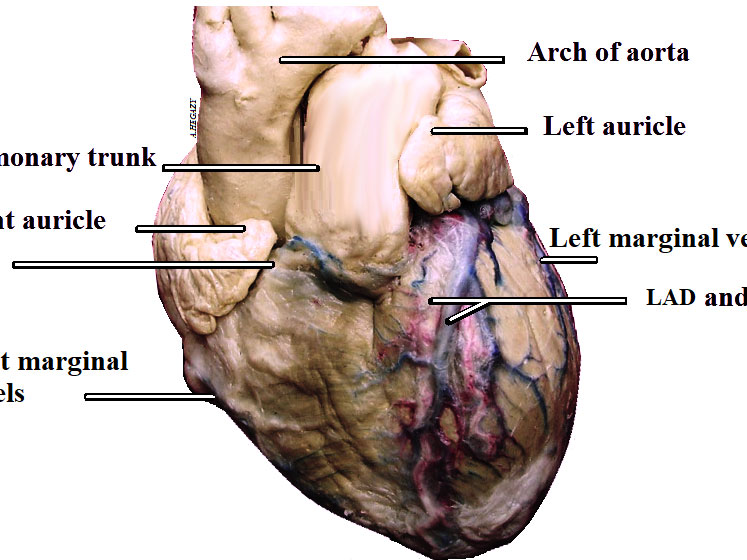 A systematic review on normal and abnormal anatomy of coronary arteries 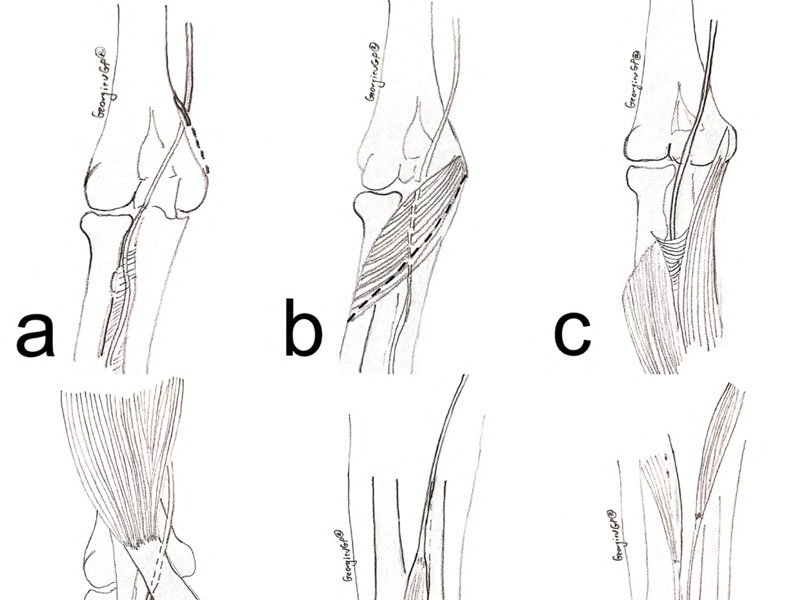 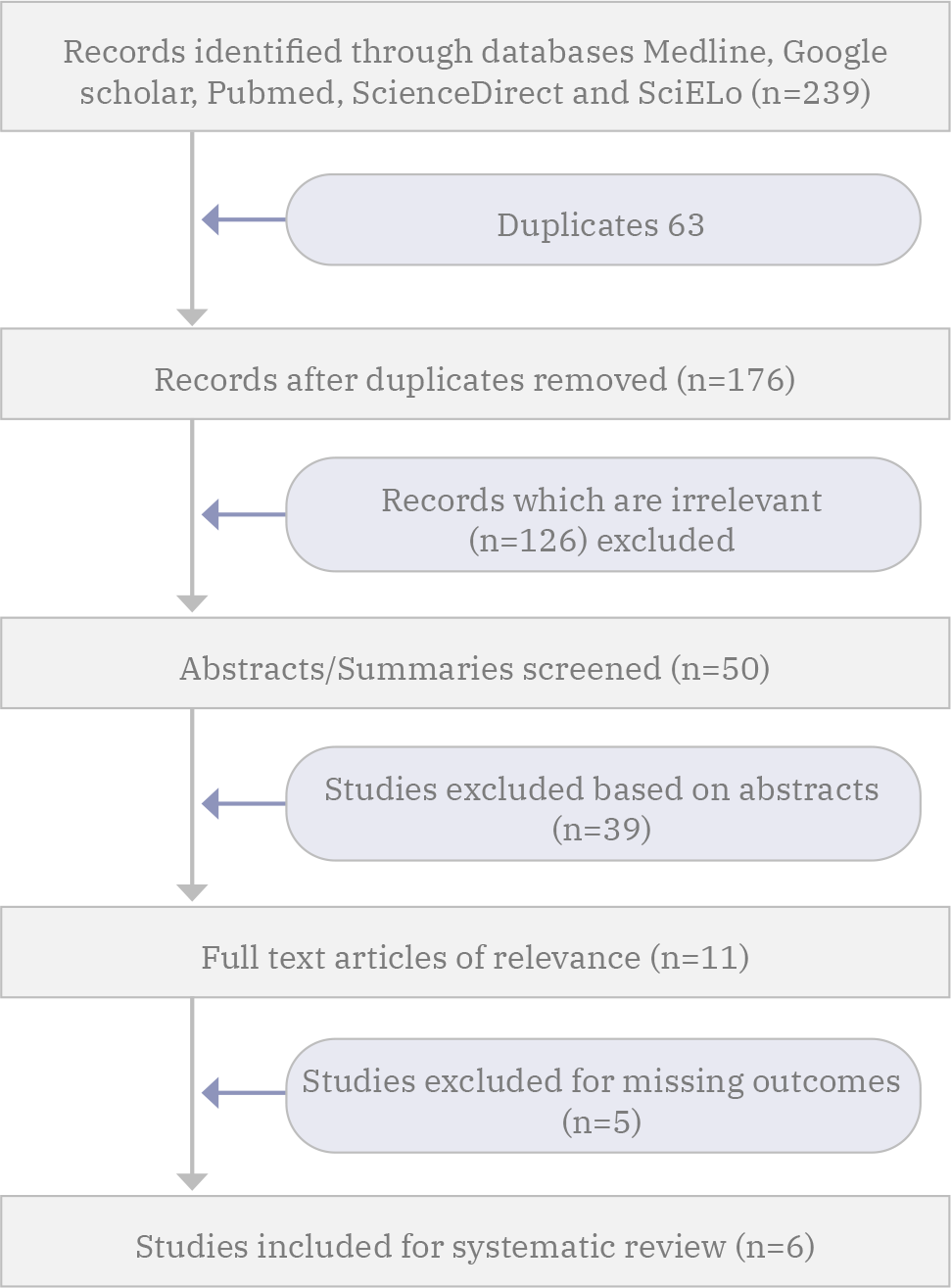 Fig 2.- Flowchart showing the application of selection criteria as per PRISMA guidelines.
Error: the field format must contains "%s" or "%1$s". 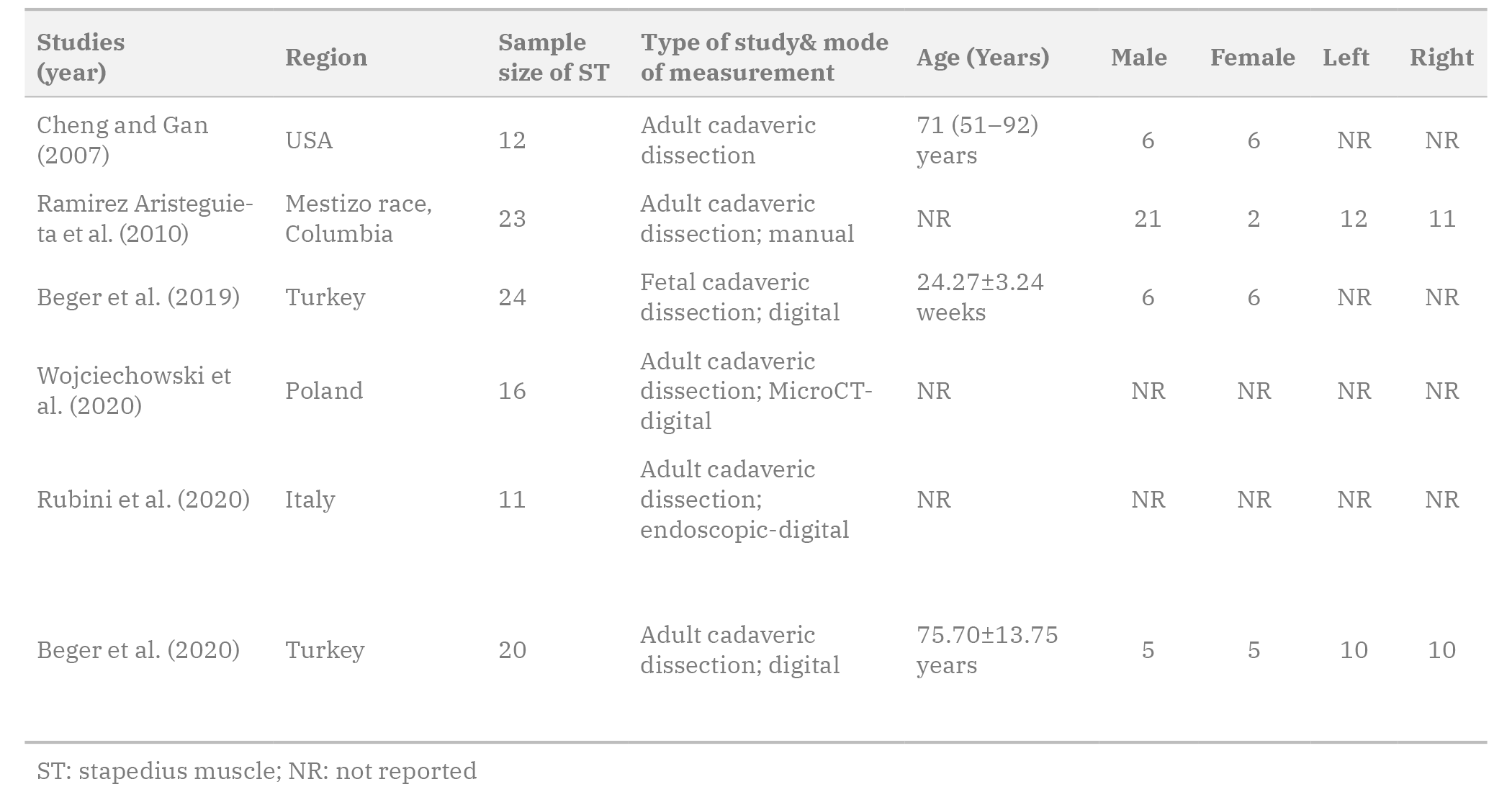 Table 1. Characteristics of the included studies. 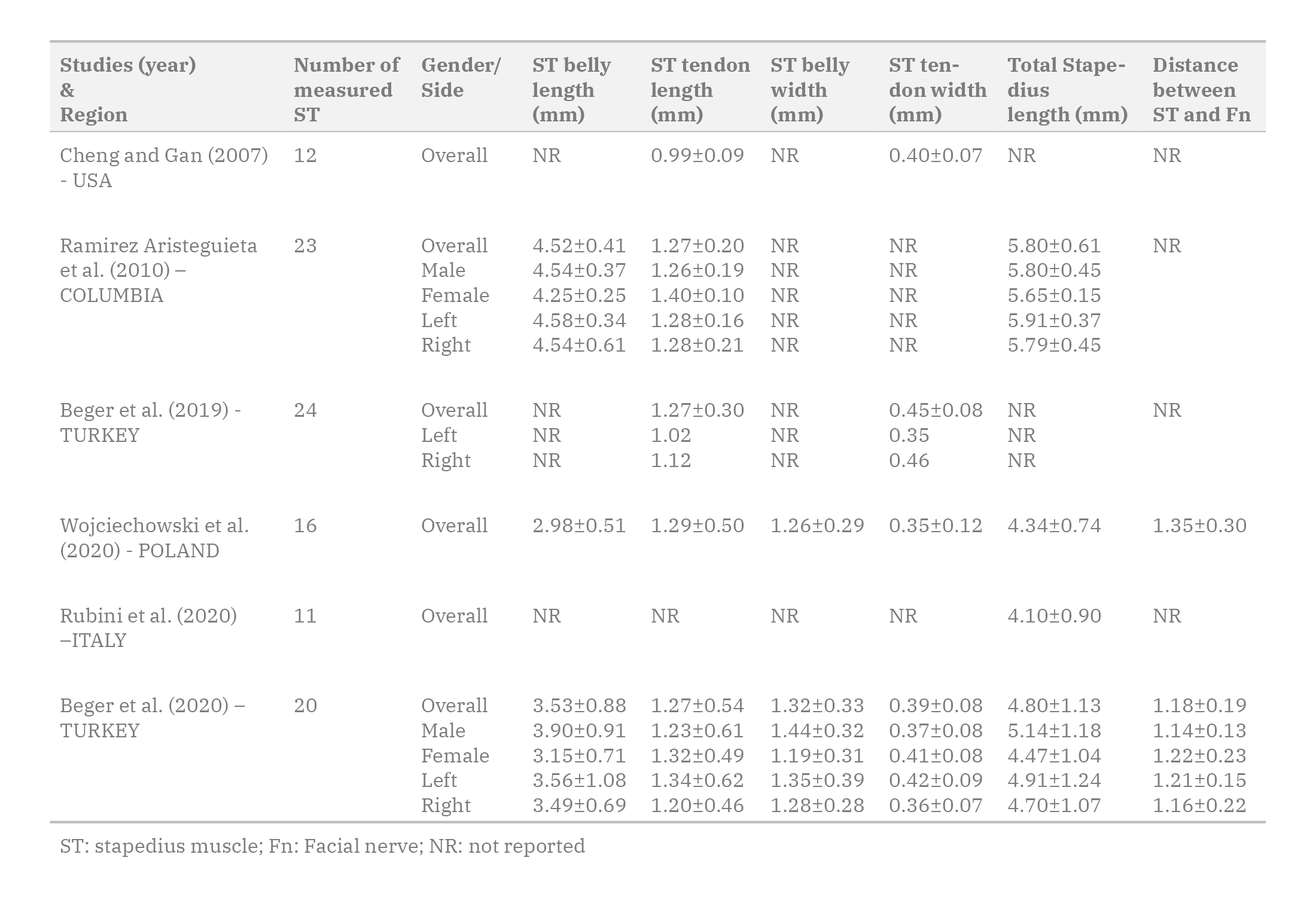 Table 2. Outcomes of the different studies on ST size values.