Our aim was to describe electron microscopic findings of anterior lens capsule (ALC) of a patient with granulomatosis with polyangiitis (GPA). A 73-year-old woman referred to our clinic due to decreased vision. The best-corrected visual acuity was counting fingers in 3 m distance with her right eye and in 2 m distance with her left eye. Slit-lamp examination revealed grade-4 nuclear sclerosis in both eyes. An operation was planned for each eye one month apart. The ALCs were obtained during cataract surgery from each eye. Ultrathin sections of ALCs were stained with uranyl acetate and lead citrate and examined under the transmission electron microscope. The lens epithelium was found to be thin and there were some small vacuoles in the cytoplasm. The epithelial surface showed irregularities. There was subepithelial and intercellular oedema, and in some focal areas the lens epithelium was detached from the capsule. ALC obtained from cataract surgery of a subject without any systemic disease showed intracellular vacuoles in some areas with a normal basement membrane. This report showed that the ALC in GPA have significant and demonstrative changes, especially in the epithelial level compared to normal eye. Our findings may have a guiding effect on the pathogenesis of GPA. However, there is still no clear evidence about the existence and pathogenesis of GPA on lens epithelium, and additional studies are needed.

Sign up or Login to see the full article

Involvement of the paranasal sinuses is the most characteristic clinical feature, followed by pulmonary and renal disease (Jennette et al., 1994). A limited form of the disease, which consists of granulomatous inflammation in the respiratory tract without overt involvement of the kidneys, has been described (Tarabishy et al., 2010). Ocular and orbital involvement can occur in patients with GPA, and may affect every structure of the eye from the eyelid to the optic nerve with a wide range of severity. Ocular or orbital involvement is found in 15% of patients at presentation, and in up to 50% of patients during the disease’s course (Tarabishy et al., 2010). Some case reports of the ultrastructural appearances are subepithelial basement membrane densities resembling immune complex deposits of renal biopsies (Horn et al., 1974). To the best of our knowledge, this is the first study in the literature evaluating ultrastructural findings of the anterior lens capsule in GPA.

A 73-year-old woman referred to our clinic due to decreased vision. In ophthalmological examination, the best-corrected visual acuity was counting fingers in 3 m distance with her right eye and in 2 m distance with her left eye. Slit-lamp examination revealed grade-4 nuclear sclerosis in both eyes. Intraocular pressures were in the normal range, and dilated fundus examination revealed no pathological findings. Her medical history included granulomatosis with polyangiitis for five years. She was under intravenous immunoglobulin (IVIG) therapy monthly with systemic 5 mg prednisolone per day. She underwent phacoemulsification and intraocular lens implantation in the left eye, and then the right eye in a second operation one month later. Anterior lens capsules (ALCs) were obtained during the surgery. The specimens were immediately put into 2.5% glutaraldehyde (25% glutaraldehyde E.M. Grade - R 1010, Agar Scientific Ltd., Essex, UK- in phosphate buffer pH: 7.4) in the surgery room for fixation. After fixation for 24 hours, samples were washed in phosphate buffer solution (pH: 7.4) and dehydrated in increasing ethanol concentrations.

Tissue samples were embedded in fresh epoxy resin (Epoxy embedding medium, 45345, Merck KGaA, Germany) and polymerized for 48 h at 60°C. Semi-thin sections (approximately 2 μm thick) were cut with a glass knife on a LKB-Nova ultramicrotome (LKB-Produkter AB, Bromma, Sweden). Freshly prepared and filtered 1% methylene blue solution was dropped onto the tissue section. The slide was left on the 100–110°C hot plate for 40–45 seconds, and then rinsed carefully under tap water. Stained sections were examined and captured under the camera of a light microscope for a descriptive analysis (Firat et al., 2019). When the area was determined by examining the semi-thin sections, tissue blocks were trimmed to prepare the ultra-thin sections of the predetermined area by LKB-Nova ultramicrotome (LKB-Produkter AB, Bromma, Sweden). 70 nm ultra-thin sections were double stained with uranyl acetate and lead citrate (Leica EM AC 20, Wetzlar, Germany). These sections were examined in a Jeol JEM 1200 EX (Japan) transmission electron microscope and the micrographs were digitalized by Veleta side-mounted TEM CCD camera using RADIUS 2.0 imaging software (EMSIS GmbH, Germany).

The lens epithelium was found to be thin and some small vacuoles were observed in the cytoplasm. The epithelial surface showed irregularities. There was subepithelial and intercellular oedema and in some focal areas the lens epithelium was detached from the capsule (Figs. 1A, B, C). Basement membrane showed discontinuations at these oedematous and detached areas (Fig. 1B). In addition, the ALCs of a normal patient who was 65 years old without any systemic diseases was obtained during cataract surgery and this sample was examined to compare with the results of WG patient. The only finding in this sample was a few intracellular vacuoles with a normal basement membrane (Fig. 1D).

This report showed demonstrative anterior lens capsule changes in GPA, which was previously evaluated in many aspects, but with limited studies at the lens capsule level. Circulating immune complexes have been demonstrated in the blood of some patients with GPA (Chaudhuri and Davis, 2016). Immunoglobulins, complement and electron-dense deposits have been found in glomeruli of patients with GPA. A pathogenetic which is well known that circulating immune complexes and the vasculitis in the respiratory tract is raised by IgG and IgM in pulmonary alveolar walls and of IgM in maxillary sinus arteries (Chaudhuri and Davis, 2016). Electron microscopic study of the lung and maxillary sinus showed intravascular fibrin, and demonstrated electron dense deposits in the blood vessel walls (Hui et al., 1981). The light microscopic lesions seen with cases of generalized WG were the characteristic lesion: a focal and segmental glomerulitis in the renal tissues (Antonovych et al., 1989). The electron microscopic findings of dense deposits on the epithelial side of the glomerular basement membrane patients with active generalized GPA provide substantial evidence that the renal injury is a manifestation of immune-complex deposition (Hui et al., 1981; Antonovych et al., 1989). The observations of dense material resembling immune complexes within the capillary wall provide supporting evidence that GPA is a disease of disordered immunity, and further suggest that the immune injury to the kidney is mediated, at least in part, by the deposition of immune complex (Hui et al., 1981; Antonovych et al., 1989). The lens capsule also has a kidney-like capsule, and before that it mainly consists of three different structures. These structures are capsule, epithelium and lens fibers. The lens is in place in the normal optic system, supported by the iris and vitreous body, with the zonular fibers adhering to the lens capsule. The lens capsule is a modified, transparent basement membrane that envelops the ocular lens completely. Embryologically, the surface originates from the ectoderm, after the intussusception of the surface ectoderm, the apical surface faces the lens vesicle and its basal surface turns outward, forming the basement membrane of the lens capsule (Danysh and Duncan, 2009). In ultrastructural studies of senile cataracts, intra and intercellular vacuoles were found in the lens epithelium. In our case report, a senile cataract patient without GPA was included to make this distinction. In the optic microscopy study of Rahim et al., they detected proliferation and change in the layers of lens epithelial cells in people with senile cataracts (Rahim and Iqbal, 2011). Tekin et al. (2018) examined the lens anterior capsules belonging to congenital cataract patients with electron microscopy, and it was observed that the lens epithelial cells were locally cuboidal. Apparently, vacuoles of different diameters were detected in the cell. These changes are different and more pronounced than normal cataract patients.

As a result, it has been shown with this study that the eyes with GPA have significant changes especially in the epithelial level compared to normal eyes, and that the basement membrane showed discontinuation. The presence of these formations has a guiding effect on the structure from which the pathogenesis of GPA originates. However, there is still no clear evidence about the existence and pathogenesis of GPA, and additional studies are needed.

Informed consent was taken from the patient. 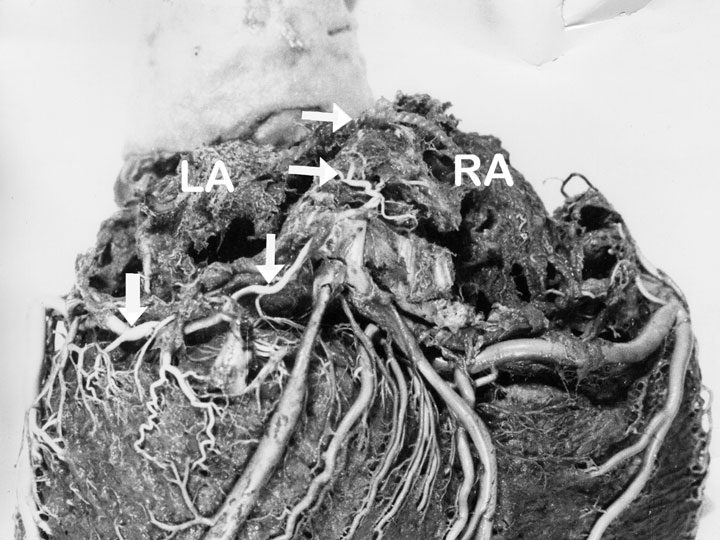 Variant of the sinus node artery with an unusual origin and course. A unique postmortem visualization after corrosion casting technique 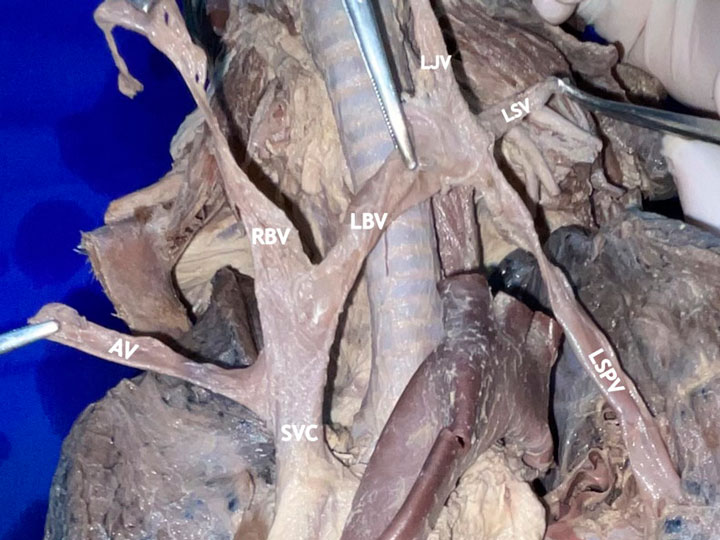 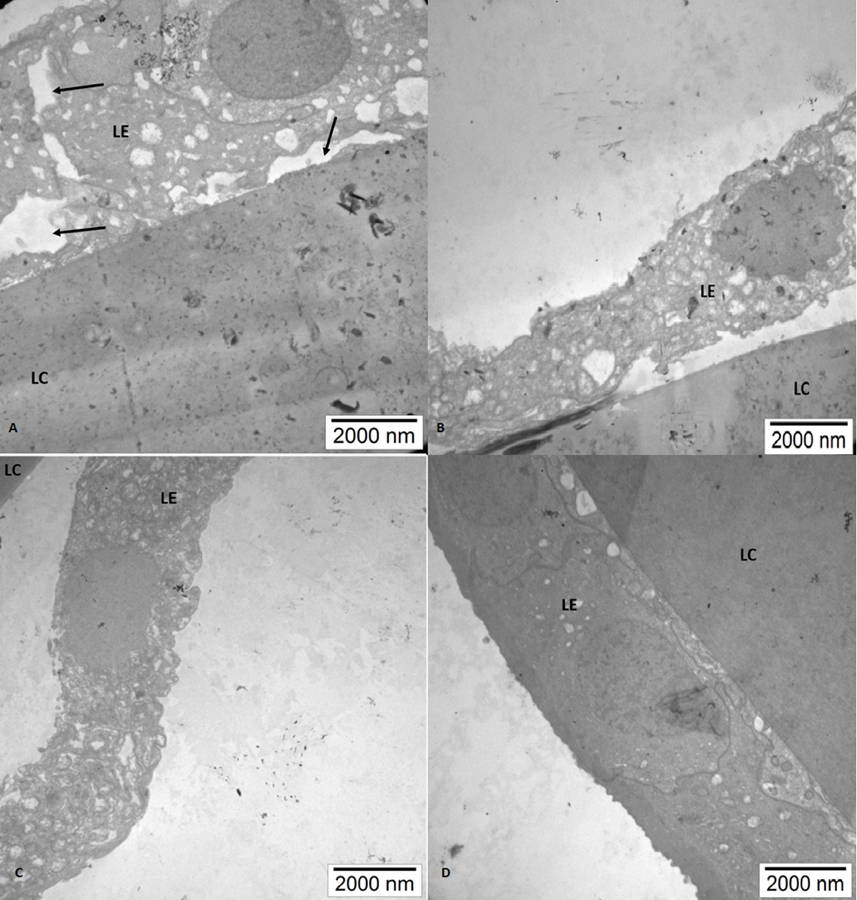 Fig. 1.- Electron micrographs of the specimen. A: Focal areas with detached capsule and vacuoles in the cytoplasm, B: Lens epithelial detachments from the capsule and vacuoles in the cytoplasm together with discontinuations of the basement membrane, C: Epithelial detachment from the lens capsule, D: Normal cataractous lens without GPA. (LC: Lens capsule, LE: Lens epithelium).