The morphology of the pterion and asterion sutures in Iranian population

The pterion and asterion are at the outer surface of the skull. The pterion is the region where the frontal, sphenoid, parietal and temporal bones join together, and the asterion is the intersection of parietal, temporal and occipital bones. The sutural pattern of both are different in the various population and races. This study examines the patterns of suture of the pterion and asterion in 210 semi-skulls of 146 males and 64 females cadaver. Four main types of anatomical patterns were found: sphenoparital 84.2%, frontotemporal 8.1%, star shaped 3.5% and epipteric 2.4%. In the study of asterion, in 14.7%, type I, and 86.3% type II was observed. In the first study of the sutural pattern of the pterion and asterion in Iranian population, similarity to the other studies of the Indian and Middle Eastern regions was observed.

The pterion is adjacent to the temporal cavity and the binding site of the frontal, parietal, temporal, and sphenoid bone, and is located in the anterolateral part of the skull, which is differing among primates. In the asterion, the connection between the parietal, temporal and occipital bones is created (Fig. 1). The variation in the pattern of the pterion has a surgical importance to deep-seated structures. The stability of sutures in animals in a particular species raises the genetic basis (Williams et al., 1998).

In 1956, Murphy and coworkers described four types of pterion (Murphy, 1956). Based on this classification, the sphenoid bone is connected to the parietal bone, and the suture is of sphenoparital type, and this prevents the attachment of frontal and parietal bones to each other. In the type of fronto-temporal, frontal and temporal bones contact each other and prevent the attachment of frontal and parietal bones (Kumar and Mahajan, 2014). In the star-shaped type, the irregular shape of the sutures are similar to the letter K, and the bones meet at one point. It should be noted that in the area of the pterion region there is also the possibility of developing a sutural bone (epipteric type) (Kumar and Mahajan, 2014) (Fig. 2).

Occasionally, bone formation may also occur in the vicinity of the septum of another bony building (sutural bone). Although the authors believe that the sutural bone is a natural and gene-controlled process, studies also emphasize the role of pathologies such as hydrocephalus, as well as studies focusing on the role of ethnic and racial differences in the incidence of sutures forms (Havaldar et al., 2015). The shape of the asterion and pterion sutures are important  in the neurosurgical  approaches to the cranial cavity (Ersoy et al., 2003; Ucerler and Govsa, 2006; Galindo de León et al., 2013; Havaldar et al., 2015; Natekar et al., 2018).The current study examines the forms of sutures of the pterion and asterion point in the Iranian population.

After obtaining the necessary authorization, 210 adult  semi-skulls, including 69.5% males and 30.5% females, were examined. In this study, asterion sutures were classified into 2 types: type I which had a sutural bone and type II without sutural bone (Fig. 3).

Each suture point of the pterion was divided into sphenoparital, fronto-temporal, stellar and epipteric (sutural). In each sample, soft tissue was removed from the suture points using appropriate tools and then the sutures were examined. In this research, descriptive statistics (frequency, mean, variance, standard deviation) were used to analyze the data. To analyze the demographic characteristics of the research, statistical analysis with SPSS software was used.

According to the results, based on the 210 samples studied, 177 specimens (84.2%) were found to have sphenopariatal, of which 84.4% were male and 84.2% were female respectively. This type was the most common form of the pterion in this study. Also, the epipteric type of the pterion with 2.4% (five samples) was the lowest form of pterion in the studied samples.

Sexual difference in pterion types was not observed between the studied samples, although the star-shaped type of pterion in females was 5.8%, more than that of the male, 4.7% (Tables 3-4 and 6 and Diagrams 3-4).

The findings of this study are in line with previous studies, although some differences are evident. Ashley’s study on the subject of pterion from an anthropological perspective points to the higher percentage of epipteric sutures in the human societies (Ashley-Montagu, 1933). In this study, the findings were in the period between 1772 and 1930, which contains important points in the pattern of the pterion in humans. He identified sixteen general patterns of pterion.

Murphy (1956) studied four main patterns of pterion and five basic patterns for epipteric sutures. Wang et al. (2006), studying the skull sutures between the monkeys and observing the pattern of family gathering, suggested that this diversity was inherited. Liu et al. (1995), in a study on mice, emphasizes the role of temporal rotation in the development of sutures and the adaptation of skull growth.

Liu et al. (1999), showed that increased activity of the MSX2 gene plays a direct role in the morphogenesis of skull bones. In other words, according to the results of morphological and genetic studies, the pattern of suture formation is influenced by ethnic and environmental factors.

In the current study, the prevalence of type I asterion was 14.7%, which is equivalent with the study by Berry and Berry (1967) in Egyptian and Indian populations. However, in the study of Mwachaka et al. (2009), asterion type 1 was reported in 20% of cases. In the recent study, the sample of asterion type 1 was lower in women, with no difference in men on the right and left side of the skull. Singh (2012), in a study on 55 skull cases, reported an asterion type I occurrence of 16.36% in samples. In this study, type I asterion in the left side was lower in men than in women.

The study of Deepak and Dakshayani (2015), which was designed on 50 skulls of both genders to assess the type of asterion, and the importance of bony landmarks in relation to adjacent venous sinus structures, type II (lack of sutural bone) with 73% was more common than type I. In the present study, 85.3% of the cases were asterion type II specimens. This review is consistent with previous studies.

Ersoy et al. (2003) performed a study on 490 adult mature skulls. In this study, 9% of cases (44 out of 490 cases) were of epipteric bone. They concluded that there is a higher possibility of unwanted entry into the orbital cavity in epipteric skulls with anterior position. The highest rates of epipteric sutures  reported by Lee et al. (2001) that was 40.3%. In the current study, an amount of 2.4% was obtained for epipteric sutures. 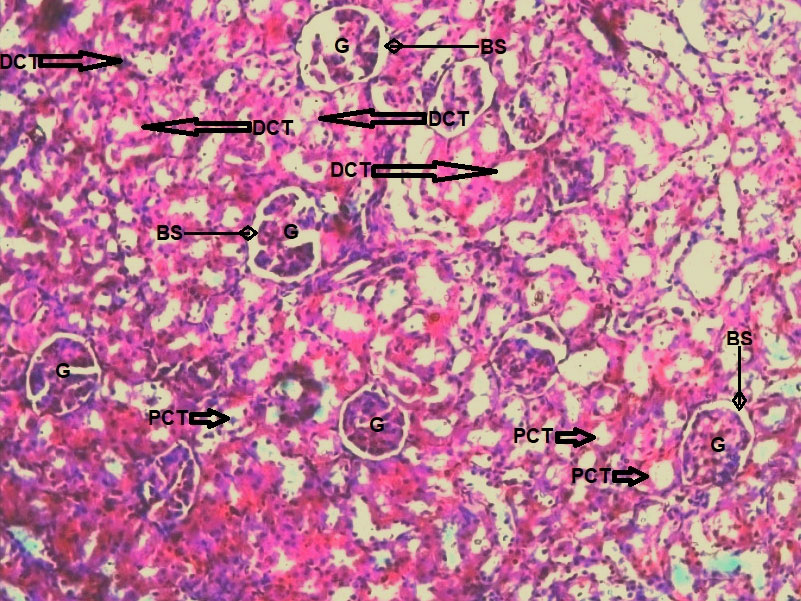 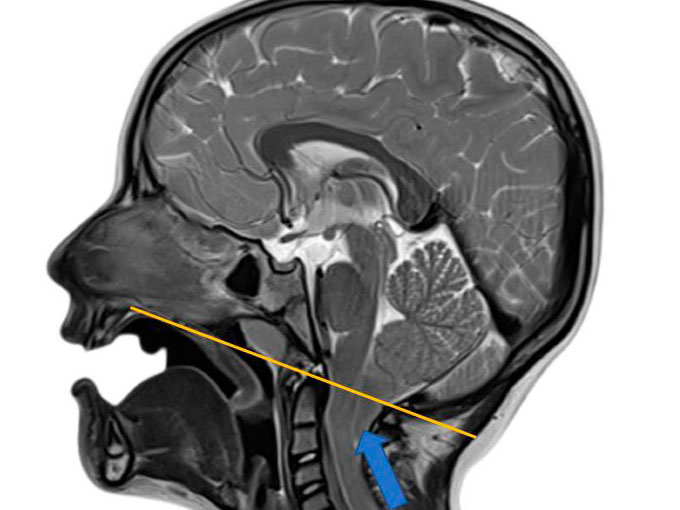 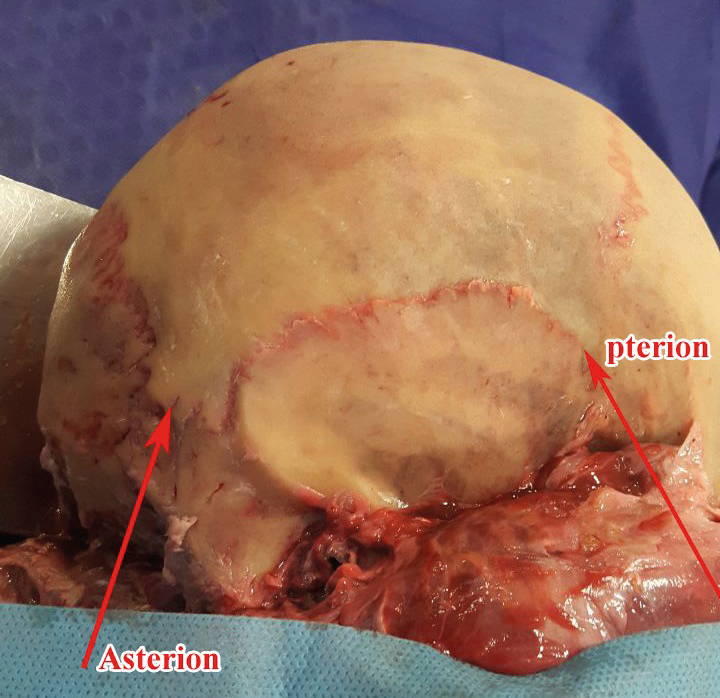 Table 1. Frequency of asterion in Genders.

Table 2. Frequency of asterion in right and left hemispheres based on gender. 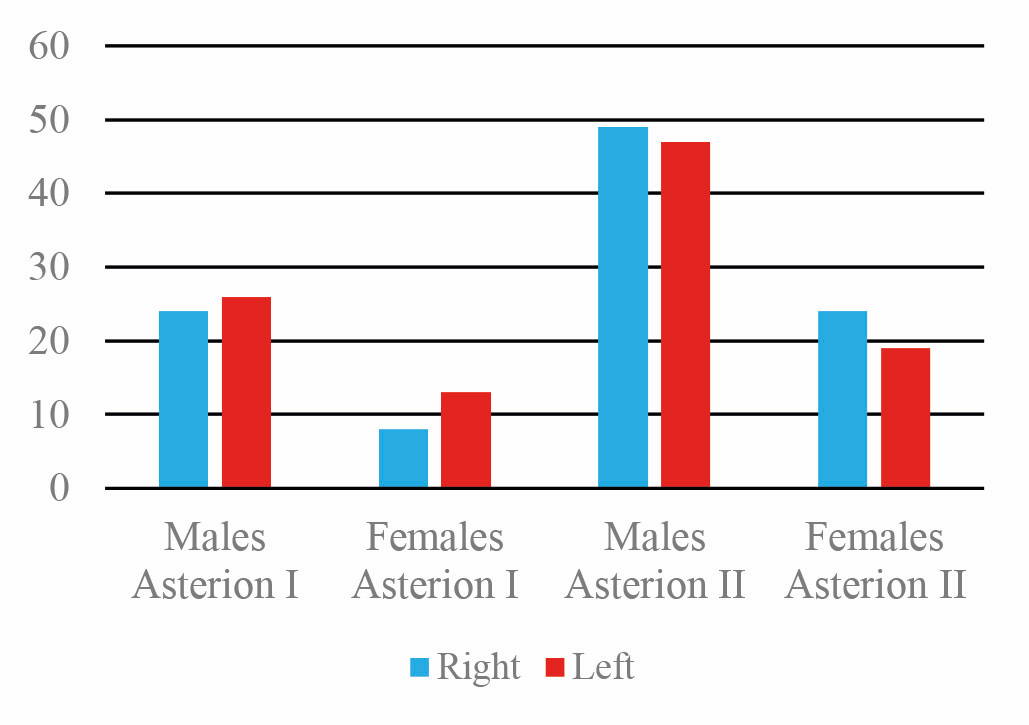 Diagram 2. Frequency of asterion in the right and left hemispheres based on gender. 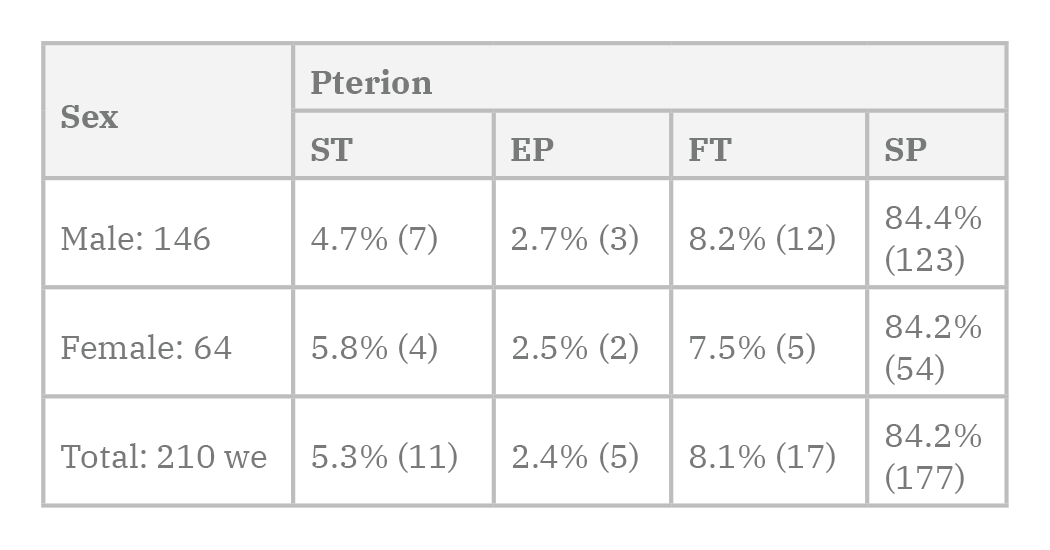 Table 3. The prevalence of pterion between sexes by their type. 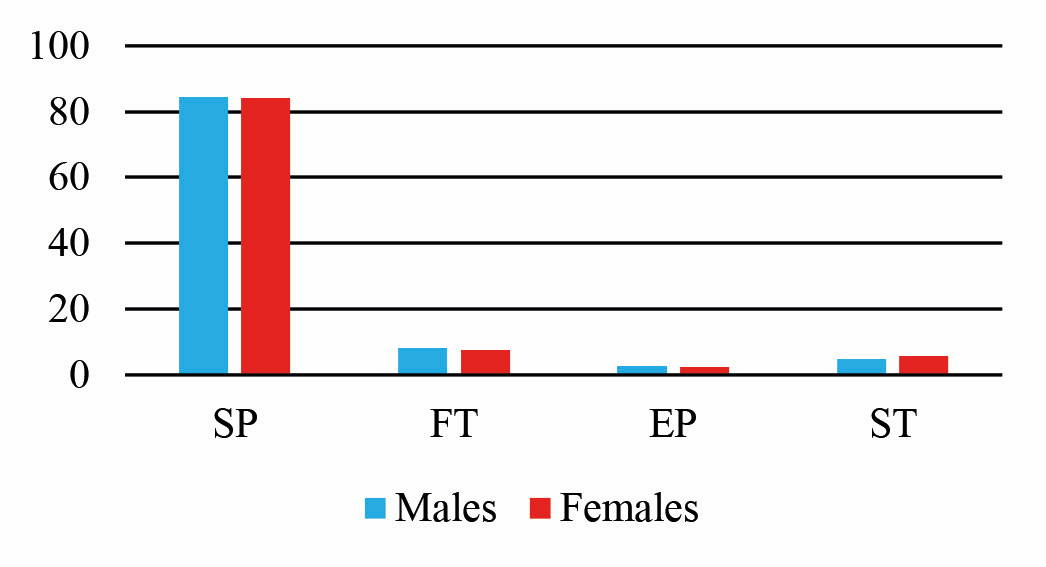 Diagram 3. The prevalence of the pterions among the sexes in terms of their type.

Table 4. The prevalence of different types of pterions in the right and left of the examined samples. 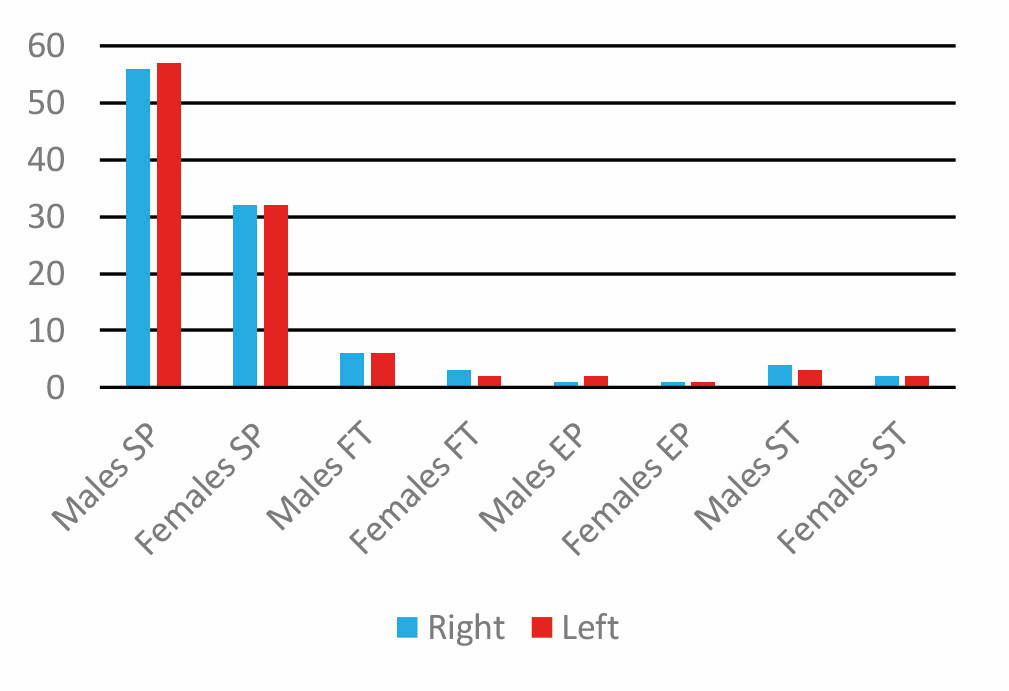 Diagram 4. The prevalence of different types of pterions in the right and left of the examined samples. 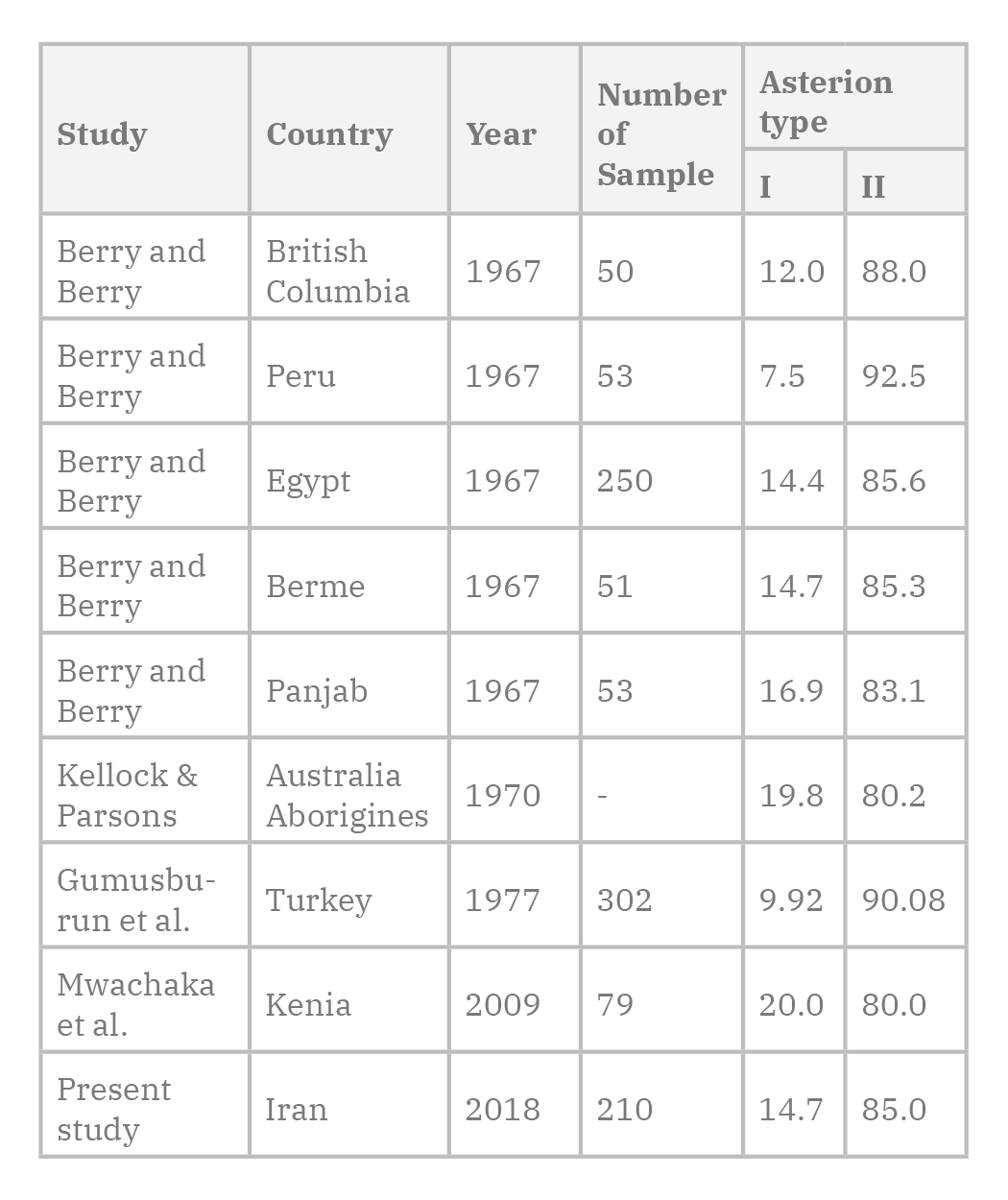 ASHLEY-MONTAGU MF (1933) The anthropological significance of the pterion in the primates. Am J Phys Anthropol, Vol. XVIII, no. 2.

KELLOCK WL, PARSONS PA (1970) A comparison of the incidenceof minor nonmetrical cranial variants in Australian Aborigines with those of Melanesia and Polynesia. Am J Phys Anthropol, 33(2): 235-239.

SAXENA SK, JAIN SP, CHOWDHARY DS (1988) A comparative study of pterion formation and its variations in the skulls of Nigerians and Indians. Anthropol Anz, 46: 75-82.