Partial abnormal pulmonary venous return syndromes are rare congenital anomalies, in which some or all of the vena pulmonalis drains into the atrium dexter or systemic circulation. Scimitar syndrome, one of the abnormal venous return syndromes, is characterized by right vena pulmonalis draining into the vena cava inferior or atrium dexter. In this article, we presented the multislice computed tomography angiography findings of a 59-year-old female with Scimitar syndrome.
Eur. J. Anat.
,
(1):
89-
92
(2021)
ISSN 2340-311X (Online)

Scimitar syndrome is a congenital anomaly characterized by a partially abnormal connection of the pulmonary veins. In this abnormal pulmonary venous return syndrome, vena (v.) pulmonalis dexter drains into vena cava inferior (VCI), atrium dexter, sinus coronarius, v. azygos, v. portaeor v. hepatica (Ho et al., 2009). In the literature, the first publication that reported the v. pulmonalis dexter drained into VCI was made by George Cooper in 1836. As a result of the autopsy examination of a 10-month-old child, he stated hypoplasia of right pulmonalis dexter and lung, abnormal arterial feeding of the right lung, displacement of heart to the right side (dextrocardia), and partial abnormal connection of v. pulmonalis dexter with VCI (Cooper, 1836). In the definition of the syndrome, the term "Scimitar" was first used by Neill et al in 1960 (Neil et al., 1960). In 1949, Dotter et al. published the angiogram images of three Scimitar syndrome patients for the first time (Dotter et al., 1949).

On chest X-ray, v. pulmonalis dexter occurs as a convex abnormal vein in the lower lung, which runs parallel to the right heart margin and extends towards the diaphragm (Dupuis et al, 1992). This appearance is compared to a curved-tip Turkish sword (scimitar) and is therefore called ‘Scimitar syndrome’. Scimitar syndrome has rarely been described in v. pulmonalis sinistra (D’cruz et al., 1964). In this syndrome, the risk of developing right ventricular failure increases as v. pulmonalis dexter drains into the VCI (Kamler et al., 2003).

The etiology of scimitar syndrome is not exactly understood currently, but it is probably attributable to an embryological error of the fundamental development of the lung bud in early embryogenesis (Cicek et al., 2014). In the lung bud, the endodermal tissue that forms the pulmonary veins does not grow into the mesodermal tissue that meets the pulmonary vein outflows in the common atrium. As a result, venous blood of the right lung drains into the systemic circulation.

A 59-year-old female patient was admitted to the Cardiology outpatient clinic with complaints of fatigue and shortness of breath. She never smoked and had no chronic disease in her history. In the physical examination, her general condition was good and vital signs were normal. The patient did not have clubbing and cyanosis. The effort test performed in the outer center was negative. In the echocardiography examination performed in our institution, the left ventricle (LV) diameter and wall movements were normal, ejection fraction (EF) was 60%. Minimal mitral regurgitation, 1-2 degrees of aortic regurgitation and 1-2 degrees of tricuspid regurgitation were detected. Pulmonary artery pressure (PAP) was measured as 35 mmHg, tricuspid annular plane systolic excursion (TAPSE) as 1.9 cm, right ventricle (RV) as 35 mm, right atrium (RA) as 46 mm. No transition was observed in the interatrial septum (IAS). VCI was collapsing more than 50%.

The patient who had a high PAP value was referred to the chest diseases outpatient clinic. The patient without a history of lung disease had an irregular breathing problem at night. She had an effort dyspnea and the modified Medical Research Council (MMRC) dyspnea scale is 2. Complete Blood Count (CBC) and biochemistry values were normal. Spirometric evaluation results were found to be borderline in terms of obstructive pathology [vital capasity (VC) max: 1.95 L (%84), forced vital capacity (FVC): 1.91 L (%85), forced expiratory volume in first second (FEV1) % 70.58L].

On the posterior-anterior (PA) chest radiograph, the right heart contour became evident due to enlargement of the right atrium. In addition, a tubular opacity was noted in the right lung lower zone (Fig. 1). There was no obvious pathology in the lung parenchyma. To evaluate the tubular opacity, Thoracic Computed Tomography (CT) and CT Angiography (CTA) were performed with Multislice CT device. Multiplanar reformat images were created in axial, sagittal and coronal planes with a thickness of 3 mm from the 0.5 mm thick raw data obtained. It was observed in CT that the right superior and inferior pulmonary veins were trending towards the inferior in the neighborhood of the heart, merging immediately above the diaphragm and drained into the VCI (Fig. 2). Left pulmonary veins were normally drained into the left atrium. Truncus pulmonalis was measured 36 mm in diameter and was wide (pulmonary hypertension). Right and left pulmonary artery diameters were within normal limits (26.2 and 26.5 mm). Right heart compartments were larger than expected. As a result of the examinations, Scimitar syndrome was diagnosed with abnormal pulmonary venous return anomaly in right pulmonary veins and pulmonary hypertension. Medical and surgical treatment was not considered, and the case was followed up.

Scimitar syndrome is a rare congenital cardiovascular defect. Although it is stated that this syndrome is found in approximately 1-3 cases in 100 thousand live births, it is thought that the incidence is higher due to asymptomatic cases as in our case (Cooper, 1836). Scimitar syndrome constitutes 3-5% of all partial abnormal pulmonary venous return syndrome (Neill et al., 1960). This syndrome is most common in right v. pulmonalis, and can be partial or total (D’cruz et al., 1964).

It is generally asymptomatic in the adult period, but may present with recurrent lung infections or exertional dyspnea. Although cases with pulmonary artery and lung hypoplasia are detected in early childhood due to the development of pulmonary hypertension (HT) and heart failure, it can be said that the development of pulmonary HT and right heart failure is also rarely seen in adult patients (Diaz-Friaset al., 2020). Miller et al. (1995) reported that cases where less than half of the oxygenated blood from the lungs participate in the systemic circulation are asymptomatic. In our case, it was observed that the right superior and inferior vena pulmonalis were totally drained to VCI. It is noteworthy that no symptoms were observed until adulthood in the case in which no significant hypoplasia was observed in the right lung. In addition, our case states that there is shortness of breath at night instead of effort dyspnea. This can be explained by the fact that the patient lives a sedentary life. Nighttime shortness of breath was thought to be related to borderline obstructive pathology observed in respiratory function test.

Imaging methods play a major role in the diagnosis of Scimitar syndrome. In particular, it is diagnostic to see the shadow of the pulmonary vein in the chest x-ray that descends towards the diaphragm near-by the right atriumand resembles a short curved (Turkish sword = Scimitar). Conventional Angiography or CT / MR Angiography are modalities that can be used for diagnosis in patients without typical chest x-ray. Our case who applied to hospital with an atypical symptom did not have a typical Scimitar sign or accompanying lung hypoplasia and dextrocardia on chest x-ray. In the CTA examination performed for further evaluation, it was observed that the right-lung superior pulmonary vein extends inferiorly in the right heart border, whereas the inferior pulmonary vein extends slightly towards the cardiophrenic sinus, and these two veins merge above the diaphragm and drain into VCI.  Due to the distant course of the two pulmonary veins, the typical scimitar shade could not be visualized on x-ray.

As a result, knowing the clinical and radiological findings of Scimitar syndrome, which is a special form of partial abnormal right pulmonary venous return anomaly, is very important for early diagnosis and treatment. 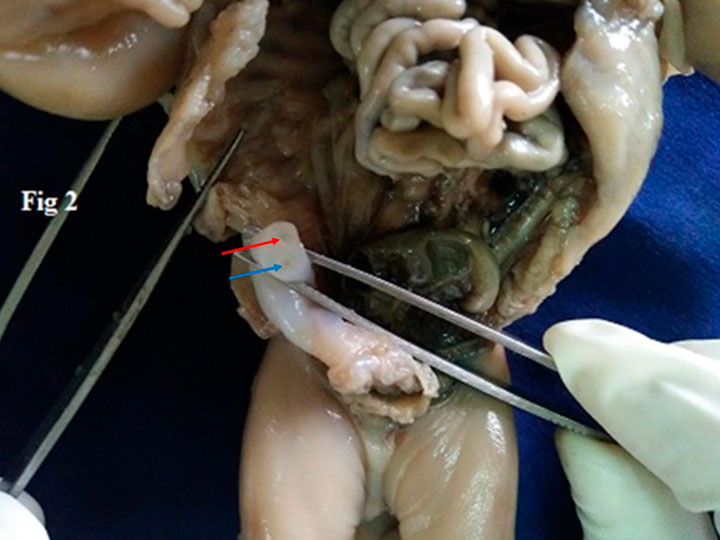 Significance of foetal autopsy in diagnosis of VACTERL association 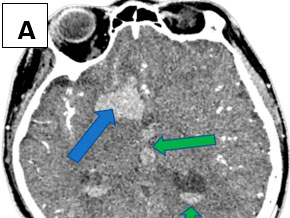 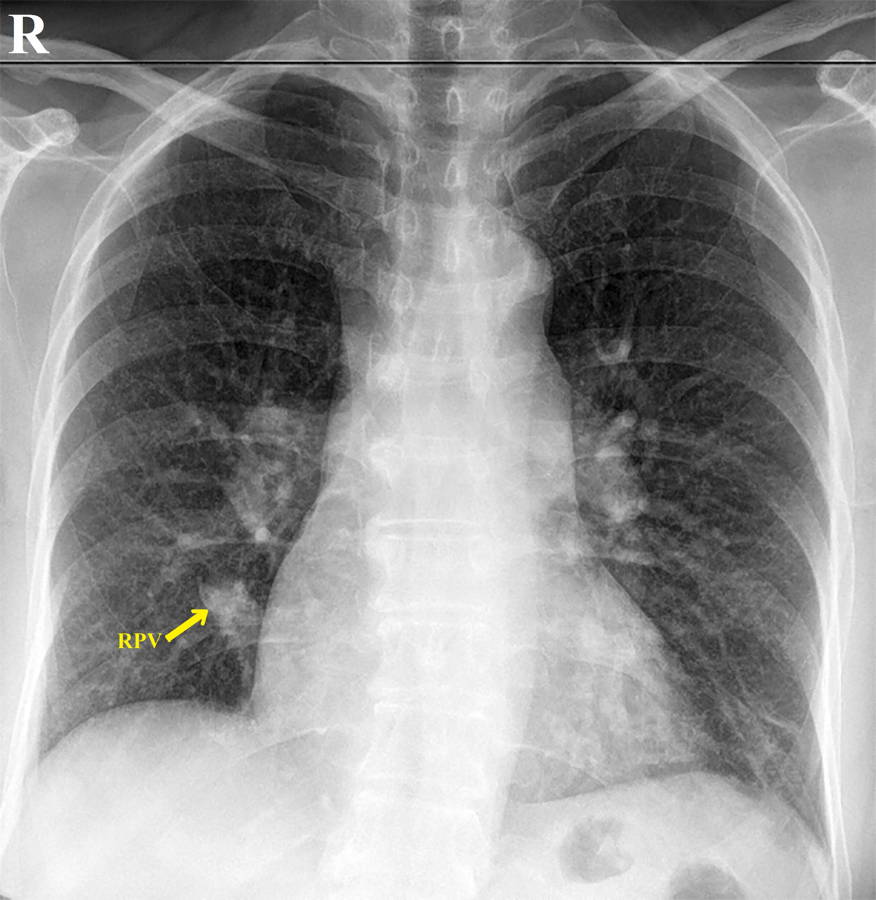 Fig. 1.- On the posterior-anterior chest radiogram, an opacity is observed in the lower zone of the right lung, parallel to the heart contour formed by the right pulmonary vein (RPV) (called as scimitar sign). 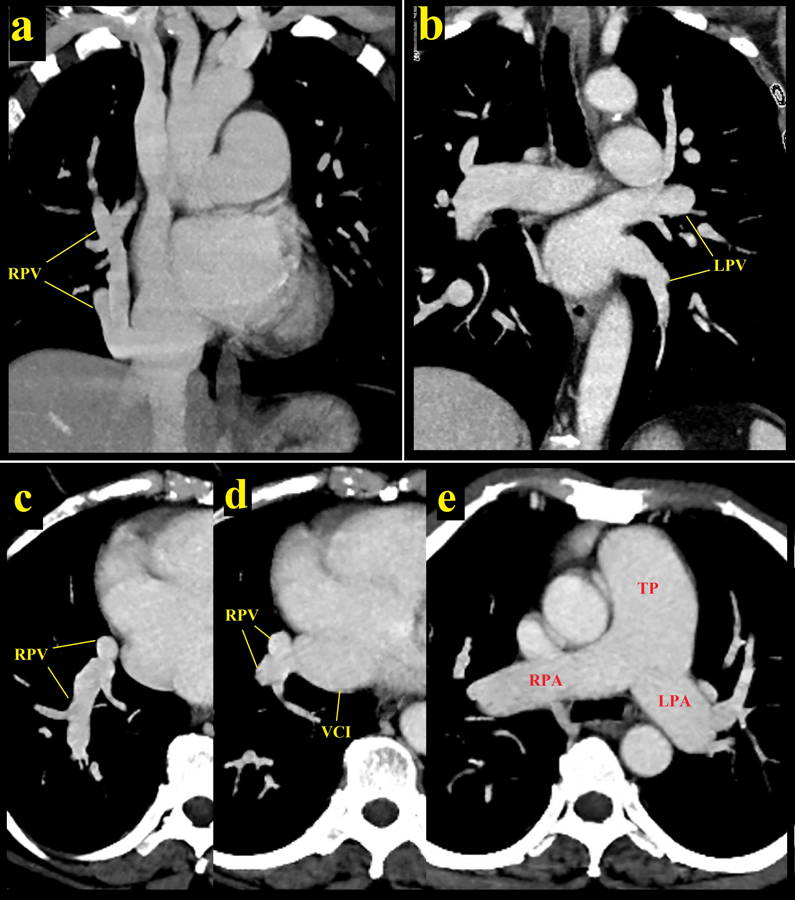 Fig. 2.- Intravenous contrast-enhanced computed tomography shows bilateral pulmonary arteries and veins. On the coronal reformat images, right pulmonary veins (RPV) are drained into the inferior vena cava by showing a downward course towards the diafragma in the neighborhood of the right atrium (a), and the left pulmonary veins (LPV) drain into the left atrium with a normal course (b). The dreinage of the right pulmonary veins into the vena cava inferior (VCI) was also seen in axial images (c and d). Right and left pulmonary arteries (RPA and LPA) are observed in normal course and diameter on axial images (e). TP = pulmonary trunk.

COOPER G (1836) Case of malformation of the thoracic viscera consisting of imperfect development of the right lung and transposition of the heart. London Med Gazette, 18: 600-601.