The gonial angle values have been studied in present day populations (Dutra et al., 2004; Uthman, 2007; Upadhyay et al., 2012; Chole et al., 2013; Bhardwaj et al., 2014; Leversha et al., 2016; Larrazabal-Moron and Sanchis-Gimeno, 2018). Questions about factors that influence the morphology and morphometry of the gonial angle is the focus of research in the scientific community. In this context, different researchers (Varrella, 1990; Luther, 1993; Kaifu, 1997; Gungor et al., 2007; Hayashi et al., 2011; Rando et al., 2014; Toro-Ibacache et al., 2016; Toro-Ibacache et al., 2019) have presented contradictory results after analyzing the jaw size and shape by means of traditional morphometry measurements and geometric morphometrics in order to determine possible morphological changes of the jaw during past centuries, the presence of sexual dimorphism, and the possibility of asymmetry in gonial angle values.

One of the most controversial aspects is the possible larger gonial angle values in contemporary subjects when compared to past subjects. Some authors have suggested that modern skulls tend to have larger gonial angles (Varrella, 1990; Luther, 1993; Rando et al., 2014) due to a modern diet of softer foods (Rando et al., 2014) in comparison to the coarser pre-industrialized diet that required more vigorous masticatory activity (Varrella, 1990). The possible angle changes in line with research that has revealed that mandibular shape varies as a function of the forces applied to it by the temporalis and masseter muscles (Sella-Tunis et al., 2018). However, Gungor et al. (2007) compared the gonial angle values of present subjects with skeletal series from different Anatolian populations to investigate possible changes since the Mesolithic period, and concluded that there is no clear evidence in the change of gonial degree angle in the passage of time.

We carried out an observational transversal study that analyzed the gonial angle values in a medieval sample and a twentieth-century sample. This study was approved by the institutional review board of the University of Valencia (reference number: H1491206464387).

Inclusion criteria of the mandibles in the study are that each specimen of both sample populations required to be of a Caucasian adult, with an age at death ranging from 20 to 50 years old, and have at least one quarter of the dentition presenting teeth numbers 35, 36, 37, 45, 46 and 47. In addition to the above inclusion criteria, the twentieth-century mandibles were obtained from skeletons of subjects who had passed away before 1970 in order to avoid the possible effect of current orthodontic treatments on mandibular morphometric values (Furquim et al., 2018).

The medieval sample was composed of 208 skeletons discovered during the restoration works at a Medieval Muslim burial site of L’Alcudiola (Favara, Valencia, Spain) (Fig. 2). L’Alcudiola Necropolis lies 6 km away from the Mediterranean coast of Spain, around 49 km south of the modern city of Valencia. The human remains found were dated between the eleventh and fourteenth centuries, and after application of the inclusion criteria, 69 of the 208 mandibles (33.2%) found were used in the study.

Due to the lack of availability of old registers on age-at-death of each individual skeleton, the age and sex of said skeletons was determined by evaluation of the metamorphosis at the sternal extremity of the rib, thyroid cartilage ossification, cranial bone synostosis and pubic symphysis morphology (Burns, 2008). The twentieth-century skeletal mandibles (n=146; 100%) with known sex and age at death were obtained from the Raymond A. Dart Collection of Human Skeletons (Dart Collection) housed in the School of Anatomical Sciences, University of the Witwatersrand Medical School, Johannesburg, South Africa. Table 1 presents the demographic characteristics of the samples analyzed.

Data were entered and stored in an MS-Excel file, and then transferred to SPSS v.23 software (SPSS Inc., Chicago, IL, USA) for statistical analysis. Continuous variables were presented as mean ± standard deviation. Categorical variables were expressed by count and percentage. Normality of the data distribution was determined by using the Kolmogorov-Smirnov test. Difference between proportions was evaluated utilizing the z-test. Differences between means were analyzed with the paired or unpaired Student t-test as required in the case of two means. Although angles are not meant to be compared using linear statistics, we used a t-test because the differences were within a very small angle range (<10º). Two-sided p<0.05 was considered to be statistically significant. Intraclass correlation coefficient (ICC) estimates and their 95% confident intervals (CI) were calculated based on a 2-way mixed-effects model. ICC values less than 0.5 are considered to be indicative of poor reliability, values between 0.5 and 0.75 indicate moderate reliability, values between 0.75 and 0.9 indicate good reliability, and values greater than 0.90 indicate excellent reliability (Koo and Li, 2016).

Table 2 presents the gonial angle results obtained in the samples analyzed. We found that the 20th century values were 3.6º (CI95% 2.2-4.9) larger than the Medieval values (p<0.001; Unpaired Student t-test).

We have carried out a study in two different skeletal samples of subjects aged 20 to 50 years old at death. We measured the gonial angles of adult subjects, and none younger than 20 years old, because the angle values show a continuous decrease until the age of 21 years when it stops changing (Larrazabal-Moron and Sanchis-Gimeno, 2018).

Focusing on the main objective of our research, we observed larger gonial angle values in the twentieth-century sample. In this context, it must be noted that we analyzed skeletons of subjects that passed away before 1970 in order to avoid the effect of current orthodontic treatments in mandibular morphometric values (Furquim et al. 2018), and that the ICC analysis reflected an excellent reliability of the measurements carried out.

Similar results were presented by Varrella (1990) as the smaller gonial angles found in fifteenth- and sixteenth-century skulls compared to contemporary; Varrella (1990) suggested that the observed changes in gonial angle values were related to the differences in intensity of chewing between the samples, possibly due to changes in diet (with the present diet being softer), but also concluded that masticatory activity, in addition to breathing, is an important factor in the determination of facial growth direction. Furthermore, Toro-Ibacache et al., (2019) in their study of current and past populations based on the intensity of masticatory loads, found that modern urban subjects with lower intensity of masticatory loads tend to have more gracile features, as well as wider mandibular angles. However, they also indicated that the large variation in the mandible shape of modern subjects may be affected by genetics and nutrition. It must be noted that malnutrition related to social status cannot be factored in a skeletal study undertaken on past skeletal remains like these, as the material properties of food items cannot be measured in extinct populations (Toro-Ibacache et al., 2019), and because malnutrition is a factor that affects the appearance of the jaw (Suazo-Galdames et al., 2008). Thus, Hayashi et al. (2012) recommended identification of the social class of a subject prior to a physical anthropology comparison or examination. The results of their geometric morphometrics analysis revealed a clear difference in craniomandibular shape between the early modern (Edo) Japanese (seventeenth- to nineteenth-century) group, which presented an obtuse gonial angle, and the contemporary Japanese group. Possibly these factors (social and nutrition status), also with the lack of samples from different periods, may be the reason of the non-significant differences between mean gonial angle degrees between late Byzantine, medieval and the contemporary periods observed in the study done in Anatolian populations by Gungor et al., (2007).

Luther (1993) and Rando et al. (2014) also suggested that dietary differences were likely to be major explanatory factors of the differences between medieval and modern mandibles. The daily diet of medieval populations similar to the one studied by us has been analyzed before (Alexander et al., 2015; Guede et al., 2017). These studies have revealed that the diet was based on cereals, pulses, lamb, poultry, fish, fruit, honey, eggs, milk and cheese, which was similar to twentieth- and twenty-first-century daily diet comprising plant foods, olive oil, fish, poultry, red meat, fresh fruit, refined white maize meal, bran, sugar, and vegetables (Abramson et al., 1960; Widmer et al., 2015). Nonetheless, the current human diet is softer than pre-industrialized diet because of food processing technologies (Rando et al., 2014) may imply that less force is needed to be applied by the temporalis and masseter muscles during biting, being a possible explanation for the current larger gonial angle values, because of the relationship between the force input and the cranial skeletal deformation during biting (Toro-Ibacache et al., 2016). This may be one possible cause of the larger gonial angle values observed in the twentieth-century sample. Moreover, it is known that the mandible is considered to be a bone whose morphology is adaptable (Nicholson and Harvati, 2006; Smith, 2009). Kaifu (1997) found a human mandibular reduction in the Japanese remains between the Kofun and the Edo periods that may be related to a reduction of chewing stress. Similarly, May et al. (2018) and Pokhojaev et al. (2019) suggested that changes in mandibular size and orientation during the terminal Pleistocene to Holocene can be explained by a reduction in the biomechanical demands of the masticatory system.

Regarding asymmetry and sexual dimorphism, we found no significant differences between the right and the left angle values in the medieval and twentieth-century samples, but females presented statistically significant larger angle values in both the medieval and twentieth-century samples, our samples being well balanced between sexes. Gungor et al. (2007) found no asymmetrical difference between the right and left gonial angle degrees of individuals belonging to the same sex, but females have larger gonial angles, which leads to concluding that mandibular gonial angle showed sexual dimorphism with female having higher values starting from the early settlement times in Anatolia through time. In addition, Hayashi et al. (2012) found morphological differences between early modern (Edo) Japanese women and contemporary Japanese women using human female remains, and although they noted that the reason of their results remained unclear, they related the results possibly to both environmental changes and genetic variation over the past 100 years. Similarly, Katz et al. (2017) also proposed that genetic mechanisms are involved in skull shape. In this context, Coquerelle et al. (2011) highlight that sexual dimorphism in the mandible is closely related to the soft tissues of the oral cavity, because these are a major component of facial growth.

Anatomical analysis of ancient and present skeletons allows for reverse translational research to be undertaken. For example, the detected increased gonial angle values in present subjects, when compared to skeletons of populations who lived several centuries ago, may provide information about possible clinical symptoms and/or pathologies that current people may indicate. In this context, our results may have future research implications, as it appears that there is a positive correlation between high gonial angle values and the presence of an angle fractures (Panneerselvam et al., 2017; Bereznyak-Elias et al., 2018; Dhara et al., 2019), which are the most common mandibular fractures (Aleysson et al., 2008). Subjects with smaller gonial angles (as observed in our medieval sample) are assumed to have greater muscle activity and thus greater cortical bone thickness (Jonasson and Kiliaridis, 2004; Osato et al., 2012), while subjects with larger gonial angle values (as observed in our twentieth-century sample) that generate relatively decreased bite forces or masticatory loads will present decreased cortical bone thickness (Panneerselvam et al., 2017). Thus, results obtained in this study may be complemented with further skeletal research in order to determine whether modern skeletons present a high incidence of angle fractures than historical skeletons.

In summary, our study suggests that contemporary skeletons present larger gonial angle values than Medieval skeletons maybe due to a current softer diet. Further research is required in order to determine the possible effect on mandibular shape and gonial angle values of factors such as social status, nutrition, geographical differences, ancestry, and genetic differences.

The authors wish to thank Miss Manuela Raga y Rubio, Head of Archeological Intervention in L’Alcudiola, for her assistance in different phases of this research work. 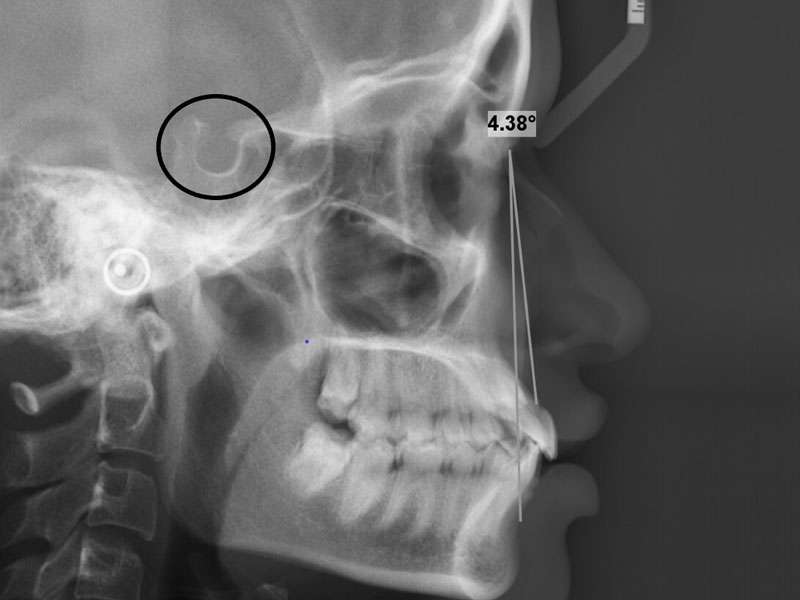 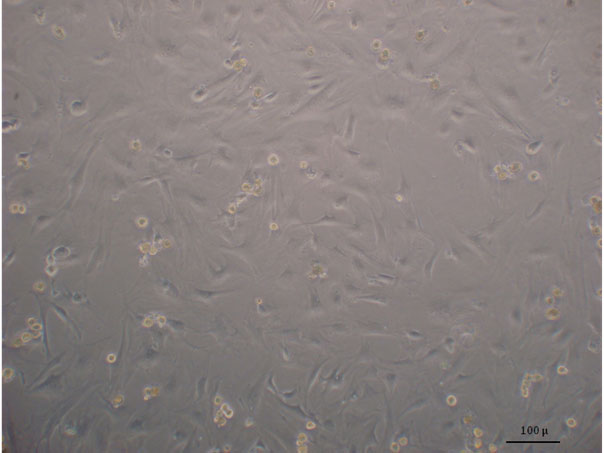 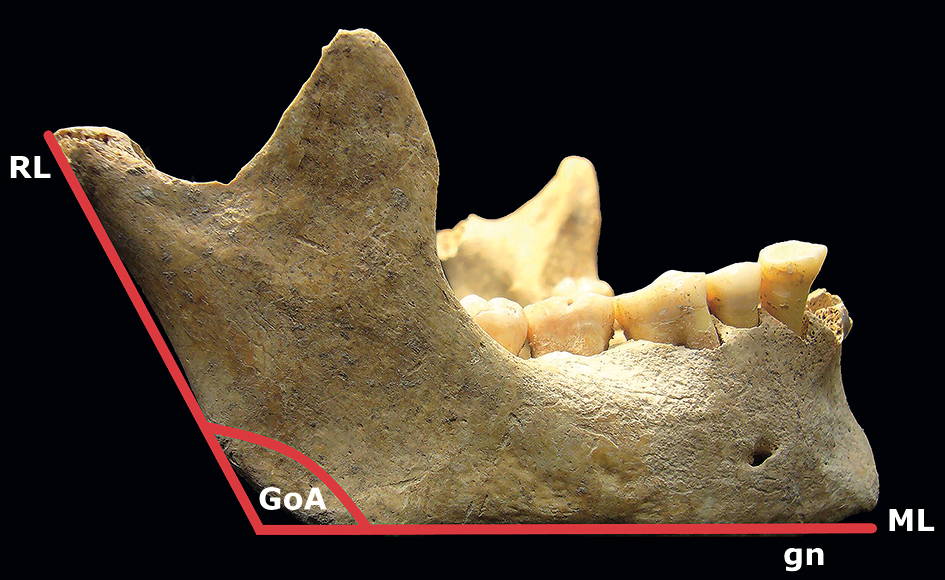 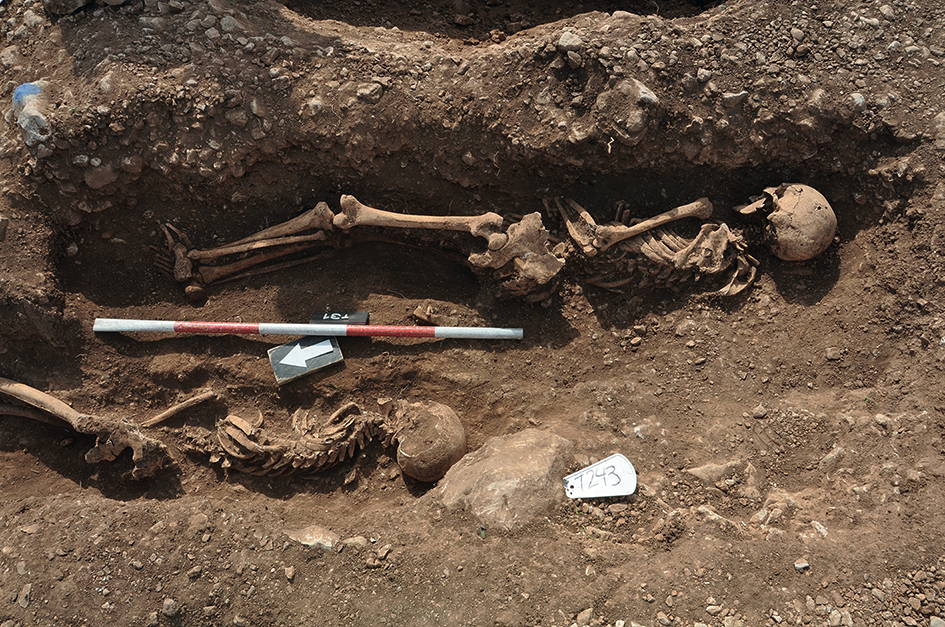 Fig. 2.- Image of the recovery of the human remains found in the Medieval burial site of L’Alcudiola.
Error: the field format must contains "%s" or "%1$s". 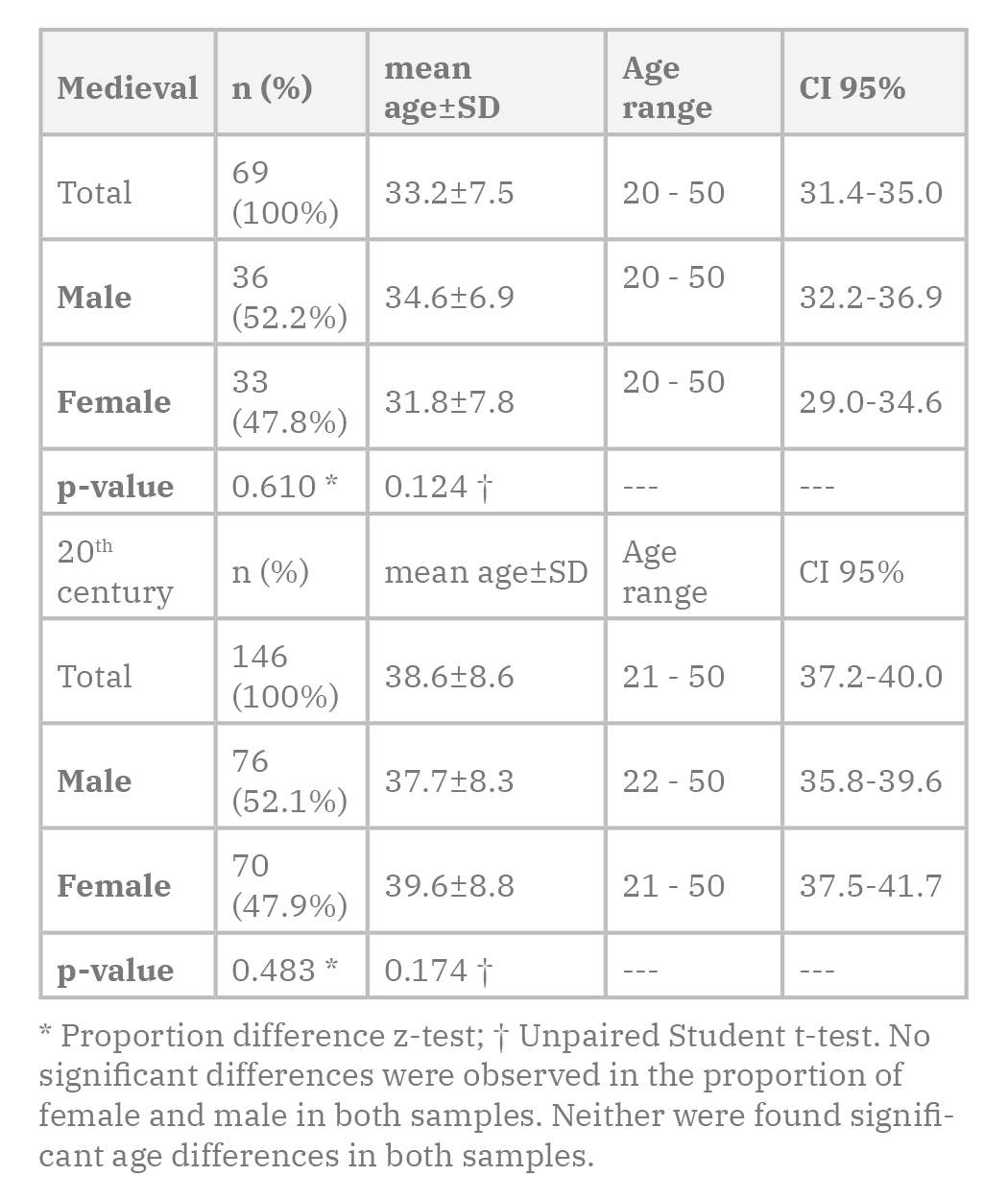 Table 1. Description of the samples analyzed. 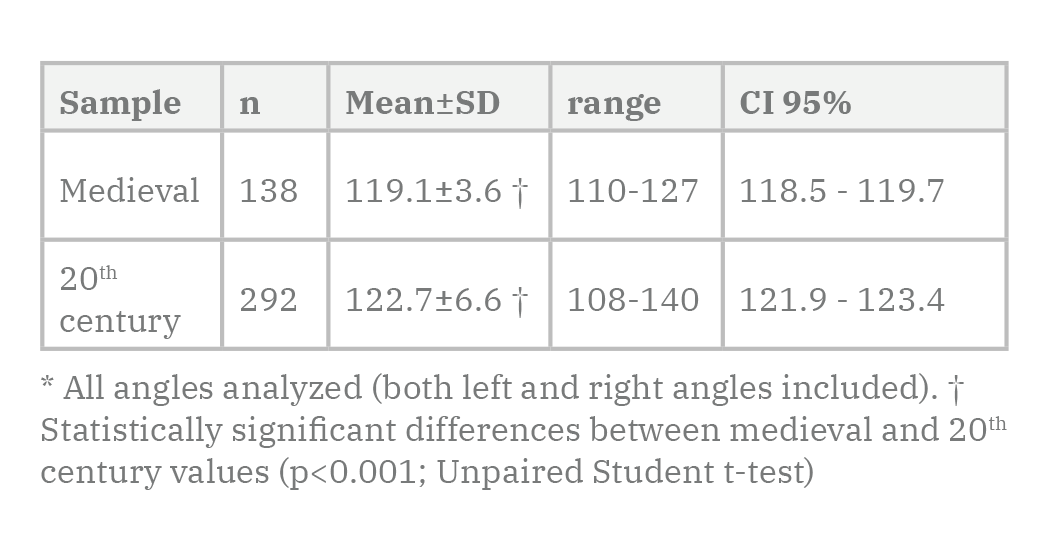 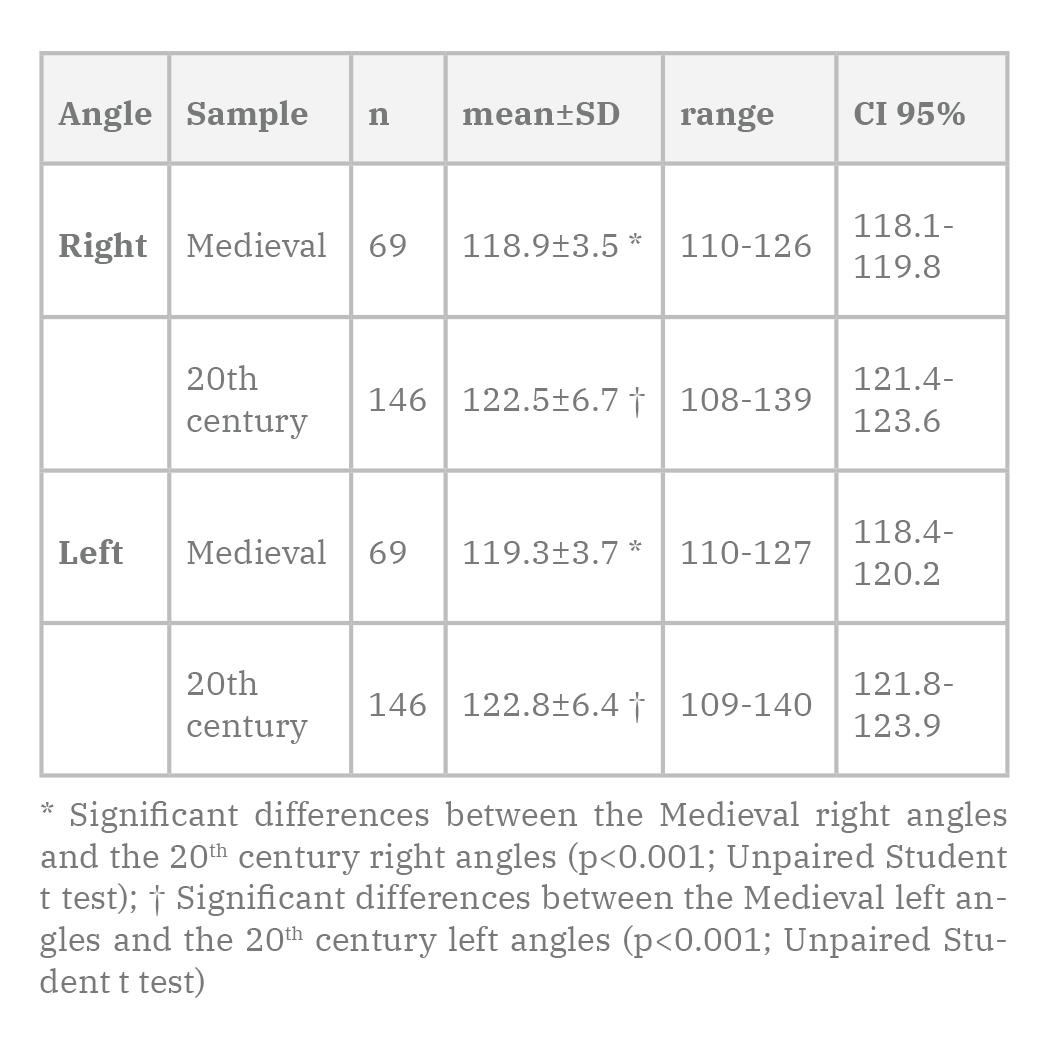 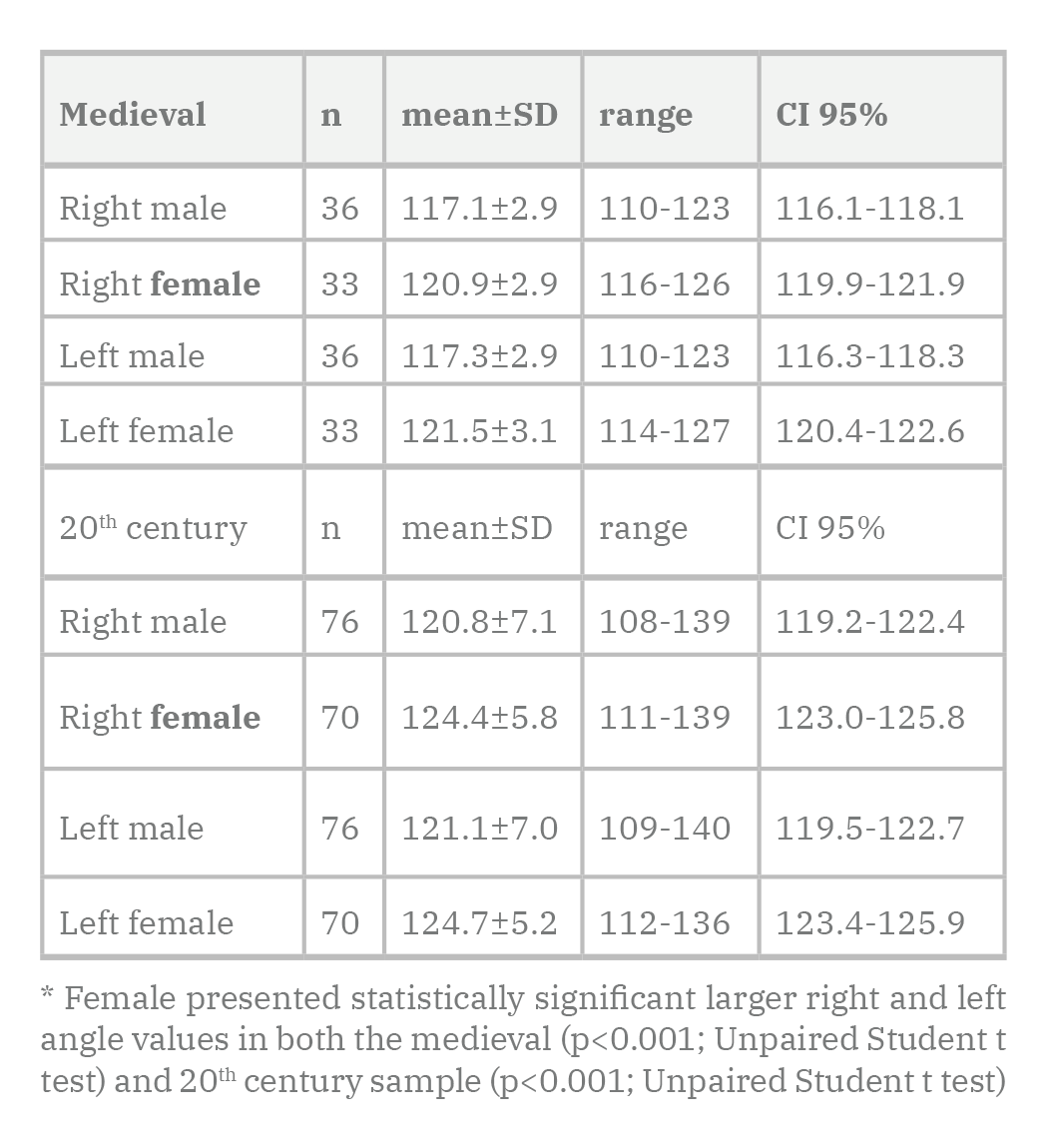 Table 4. Analysis of the gonial angle values in female and male (grades) *.

DHARA V, KAMATH AT, VINEETHA R (2019) The influence of the mandibular gonial angle on the occurrence of mandibular angle fracture. Dent Traumatol, 35: 188-193.